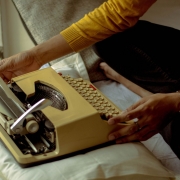 The corpse was so well-preserved that they thought it was fresh.

Local workers found a man completely submerged in peat, arranged in a fetal position. They named him the Tollund Man.

On his head was a cap. Around his waist, a belt. There was a leather noose around his neck. Apart from that, he was naked.

This grisly trail of clues led to widespread public pondering.

Why was he naked? What’s with the mixed-grain porridge? And why did he have to die?

Some evidence gave conclusive answers: he died in the 4th century BC. He was roughly 40 years old.

But other theories emerged, too. That the man was a farmer who had been executed to appease the gods. The grains in his stomach were part of the sacrifice, to encourage crops to grow.

Or maybe he was just a wandering nudist in the wrong place at the wrong time.

But, as humans, we’ll continue to project stories on absolutely everything. Research consistently shows that, from activating language centers to releasing organic chemicals such as oxytocin, our brains love storytelling.

The Tollund Man couldn’t be a random corpse. We had to give him a name, a history, a life. Stories. They move people. And moving people is magical.

The secret of moving crowds from your couch

I first realized the power of storytelling back in 2014. From my little desk in my little room from the middle of nowhere, I was publishing stories that generated more traffic than by those companies with an army of writers.

It was true. Writing was the most radical thing you could do without spending any money. My stories were traveling the world while I slept, searching for opportunities on my behalf.

“If you can’t code, write books and blogs, record videos and podcasts. Media travels and earns while you sleep. It searches the world for opportunities for you.” — Naval Ravikant

Seeing how words moved people was powerful. Reaching masses from my little desk felt good. But somewhere underneath that blog was a little secret that changed my writing forever.

I first found the secret between the lines of a random blog post I read in 2013. Rereading it over and over again didn’t help. I had to pick up my coat and go for a long walk to digest what I had just discovered.

That secret taught me most of what I know about writing, even though I wasn’t a native English speaker and lacked confidence in my skills.

And it forms the core of our storytelling strategy at Growth Supply today.

The raw horsepower of The Single Line

The simple secret I had uncovered came from poet Charles Bukowski. It contained just six words:

“The secret is in the line.”

I remember rushing back home on that January day to write down every single thought Bukowski’s advice had inspired during my walk. Later that day, I studied a few other posts on the same topic.

Even today, every time I see someone write an article with complicated, jargon-filled lines, I remember the following notes I took from those blogs:

What is the primary purpose of any piece of writing you publish online?
– To get what you’ve written read.

So, what’s the primary purpose of your headline, your graphics, your fonts, and every other part of the content?
– To get the first sentence read.

And the purpose of the first sentence?
– To get the second sentence read.

This may sound simplistic. Or maybe even confusing.

But the secret is in the line. If no one reads, all is lost.

The key to getting someone to read is taking it one sentence at a time, ensuring your readers are so compelled by that sentence that they want to read the next.

You won’t be able to pull this off all the time. Hell, you won’t even pull it off most of the time. But if you keep the raw horsepower of The Single Line in your mind as you work, you might make something good enough to be read and shared … maybe even shared widely.

This is foundational because even if you employ every BS “content distribution” trick and tip in the book, if your writing is bad, it won’t get you anywhere.

The Single Line approach changed my writing, and eventually, my life.

It enabled me to build two businesses in today’s overly crowded content industry. But it wouldn’t have had the same impact had I not questioned why it mattered.

I outlined the core pillars of building a storytelling strategy in How we got 11.3 million pageviews without the growth hacking BS. And in a recent essay, I shared why I think effective writing is lean, clean, and easy to read.

But none of those insights matter unless you sit down alone with your thoughts to type words on a blank page, one line at a time.

The secret hides in those silent seconds where you realize you need to connect your monkey mind to the blank page in front of you. This is the reality where there is no background music. It’s in those very silent moments that you admit no productivity tool or fancy writing app can save you from getting your mind to focus on that empty screen.

Writing and thinking well, line by line, isn’t easy. But if you remember The Single Line mentality as you work, you might bring together something so good that it connects with people in exactly the ways they need.

It begins by respecting your craft. It requires treating your words carefully. In a world where you are just one boring line away from losing people, focusing on one line at a time helps you keep the audience in mind.

Take the lazy intros you see in the majority of me-too articles published on the Internet today — they all follow the pattern below:

Have you ever felt lonely after having binged on chocolates? I’m sure you can relate! We’ve all been there, right? I know. You are not alone! In this post, I’ll teach you how to stop binging and make you insanely successful at not binging!

Instead of arrogantly assuming the reader should relate or begging for her attention, why not craft your story, one line at a time, so readers are so compelled by that line that they want to read the next?

Getting people to read your story, long-form essay, or blog post gives you a few priceless minutes to make an in-depth, intellectual connection with anyone, anywhere in the world.

“If words weren’t quite so easy to produce, it’s possible that people would treat them — and maybe each other — with a little more care.” — Markham Heid

The words you put out in the wild have the power to move the masses.

Treat your words with care.

Keep The Single Line in mind as you craft your own Tollund Man story.

If you learn to write, you can change your life. The secret is in the line.