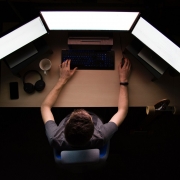 It isn’t every day that I hop on a Skype call with a startup founder who is so blunt.

“We don’t sell online forms. We make organizations more productive,” he subtly corrects me. “It’s a deceptively small difference. After all, who cares about boring surveys? I started JotForm 13 years ago, and even I’m not passionate about forms.”

I had never heard of JotForm. Yet another website you can use to build surveys, was my first impression.

An arrogant assumption, yes — I probably could have benefited from doing some research before our call — but I knew Google Forms at least. And I knew TypeForm, which was announcing one investment round after another; they were the cool kids within startup circles.

What I didn’t know, however, was how meeting JotForm’s founder Aytekin was about to change everything I knew about doing business.

What’s beyond your otherwise boring business?

The charts Aytekin shares on his screen make me notice an interesting insight: the numbers of both paid and free users of his company, whose name I had never even heard before, were high. Indeed, they were way higher than those of their competitors who showed off their public figures on the frontage of TechCrunch.

Aytekin grew JotForm to over 5 million users without a single dime in outside funding.

VC money. Silicon Valley. Being a cool kid within startup circles or spending a fortune on PR agencies to announce investment rounds. None of these things interested him.

It was selling “organizational productivity,” not “boring forms,” that he was obsessed with — a mentality that focused entirely on making customers more productive and, eventually, successful. As he shares in a 2018 post:

“We operate in an overly crowded industry, where even Google is gunning for our market share. And our competitors are always pushing to ‘elevate’ forms. They write edgy web copy about AI and conversations. Some even claim that forms are dead, while others try to coin one fancy term after another. That’s fine. They can focus on the cool factor. But our customers just want to do business, and do it well. How do we know? By asking — and listening closely. Focusing on the customer (not the competition) brought us over 1 million new signups last year alone.”

Instead of shoving his product down people’s throats, Aytekin sells “something bigger”: they make organizations more productive. And selling such customer success has been growing his JotForm empire by over 50,000 users per month.

But enough with Aytekin and those boring forms. Let’s get straight to what interests us in all this:

What does it actually mean to sell something bigger, especially when it comes to applying it to day-to-day business?

And how do you find your own “something bigger” in the first place?

What “something bigger” actually means

Selling something bigger means capturing attention by selling an idea that is bigger than a thing, not capturing dollars by (hard) selling a thing.

At Growth Supply, we call the “something bigger” your “core narrative.”

Your core narrative is what you sell beyond your product. It’s the broad idea behind your otherwise selfish brand.

Defining a core narrative helps you to sell your product without shoving it down people’s throats. It informs behavior across your entire company as the business grows and evolves. Teams who otherwise run around like headless chickens finally understand the company story and work towards a clear north star that guides where they are going.

Turn to any industry and you’ll find proof that selling something bigger is not only powerful, but wildly profitable. In an earlier essay, I explained the core narrative philosophy over different examples and then took a closer look at Slack and Intercom, two of today’s fastest-growing startups.

Remember how Intercom doesn’t hard-sell its otherwise boring chatbot apps. Their core narrative is “to make internet business personal” and this narrative informs behavior across their entire company, from deciding what features to release, to guiding all their departments, including their:

To find your core narrative, find out what success looks like for your customers and help them get there

Caring about your customers’ success is good for business because customers don’t care about your business. But they do care about being successful, impressing their boss or living a better life.

That’s why going beyond your otherwise selfish brand begins by finding out what success looks like for users and then crafting a narrative that will help them get there.

There’s a subtle but vital difference, though:

Some businesses (e.g., one selling an image compressor tool) can survive without a core narrative. After all, every case is unique. But why not start with a humble exercise?

Whatever it is that you are doing, try filling in the blanks in a simple template like the one below:

We don’t sell [insert your core business here], we [insert the benefit for your customers].

You don’t have to be a business to apply such thinking. Designers, bloggers, freelancers — anyone can craft their own north star.

Using the phrase “core narrative” isn’t to impress our clients with some complicated jargon. But when working with companies, especially those in a later stage of growth, we’ve found that business terms like “mission” or “mission-driven” can lack clarity on what they actually mean.

Those terms look beautiful on paper but many people also find them too fluffy or academic. And it becomes hard to apply them to day-to-day business when only a few people take them seriously.

Using the term “narrative” is interesting as it also adds the “story” angle to what you are doing. And this makes it easy for everyone in your organization to understand and sell (I mean, tell) your company story across all touchpoints.

A core narrative equips your customers to achieve results in their professional and personal lives.

And in the meantime, it also guides your product decisions. As Public.com’s CEO Leif Abraham puts it, for narrative-driven companies, it’s a huge advantage to be able to quickly kill ideas in order to stay on track for the long-term:

“In turn, if you don’t have that clear north star to guide you to where you’re going, the signals you get along the way will drive where you’ll be in the future. This creates a huge risk that you’ll end up building a product that is a Frankenstein of features and a team that marches in all directions.”

Any business can sell (tell) a core narrative

If your company sells accounting software, you are not actually selling account software; you’re giving your customers freedom to focus on building a product they love instead of wasting their lives with all the hassle of accounting.

You are selling them a better life, often a better version of themselves. And when you base your core narrative on such customer success, you stop doing dangerous, egocentric things to your customers. You move from writing self-promotional newsletters or hard-sell homepage copy to delivering true value that genuinely helps them get better at what they do.

Selling something bigger gives you a chance to make them care by selling an idea that is bigger than a thing, not capturing dollars by (hard) selling a thing.

And that something bigger is your core narrative. It’s the broad idea behind your otherwise selfish brand.

If you ever decide to run a paddle sports shop where people can rent kayaks and canoes, remember very few people care about kayak design or reinforced resin paddles.

They want to soak up a summer afternoon. Spend time with people they love. Feel the warm breeze and stretch their desk-bound muscles.